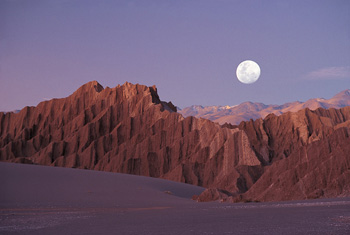 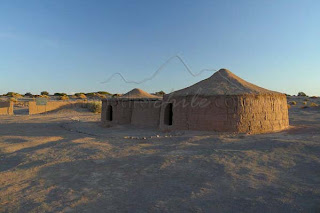 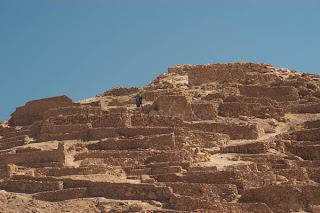 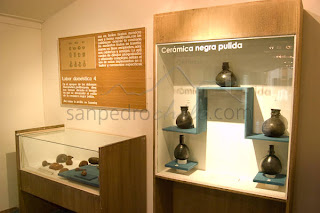 The Spaniards who rode horses and carried guns invaded it in 1540. The natives had never seen horses, metal helmets or guns, which made it easy for the Spaniards to conquer them. All the native chiefs from San Pedro de Atacama were beheaded.
The Pukará de Quitor, in San Pedro de Atacama, was restored in 1981 and was declared a National Monument in 1982.
PADRE LE PAIGE ARCHAEOLOGICAL MUSEUM
This museum has been named after its founder, a Jesuit who arrived in 1955 to take over the parish in San Pedro de Atacama. This man performed an in depth archaeological study collecting diverse indigenous objects. 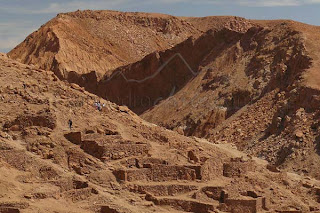 After the death of father Le Paige, this university has remained in charge of the conservation of these objects as well as of the continuous investigation in San Pedro de Atacama. You can currently see a sample of how the Atacamanean villages evolved and how the Tiawanaku, Inca, and Spanish cultures influenced them. This sample holds over 380,000 archaeological specimens that include ceramic, clothing, precious metals, textiles, mummies, and engravings.
We invite you to visit San Pedro de Atacama, and enjoy all the beautiful tourist attractions San Pedro de Atacama have to offer.
Posted by Alyssa Johnson at 4:25 AM No comments: 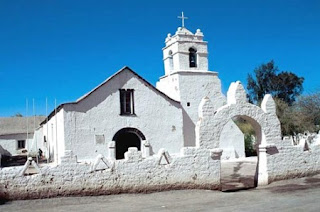 In this amazing tour in San Pedro of Atacama you will be visiting Hierbas Buenas, a place where you will find a great variety of rock art, characteristic from San Pedro of Atacama. Then you will visit the Rainbow Valley (Valle del Arcoíris), which is famous for its mountains and multi-colored rock formations. The tour ends in a beautiful village in the mountain heights known as Rio Grande befero going back to San Pedro of Atacama.
HIERBAS BUENAS
Located 68 km (42 miles) from San Pedro de Atacama and 23 km (14.3 miles) from the deviation towards Rio Grande. This place was used in Pre-Hispanic times by the ancient caravan travelers as a place to rest in their expeditions in search for exchange of goods. The people of San Pedro of Atacama would carve messages on the stones for the travelers. In the carvings we can find shamanic forms as well as animals, mainly llamas, foxes and flamingoes. 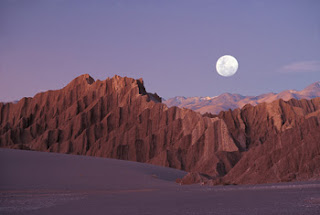 RAINBOW VALLEY
Following the route and taking the deviation from the route from San Pedro of Atacama towards Matancilla, at km 3.2 (mile 1.98) to the left you will find the Rainbow Valley, an area surrounded by mountains and multi-colored rock formations. Here you will find mountains in ochres, greens, blacks, purples, browns, and endless shades of colors to feast your eyes on.
RÍO GRANDE
In the basin of the “big river”, 90 kilometers from San Pedro de Atacama, towards Calama, lies this village with a population of around 96 habitants. Its location was strategic, as it was the forced passageway for caravans traveling between San Pedro de Atacama and Chiu-Chiu. Proofs of this are the surrounding archeological sites that show petroglyphs of the guanaco hunters during the pre-Hispanic period. 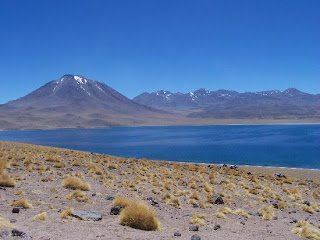 Enjoy the experience of a San Pedro de Atacama without boundaries!

The beautiful town of San Pedro de Atacama is named after its patron saint San Pedro (Saint Peter), and the word Atacama, which, according to the ancestors comes from “Accatchca” in the Cunza language and means Head of the Country. Over time, this term underwent many modifications until it arrived at today’s pronunciation. San Pedro de Atacama was conquered by the Incas in 1450 and then by the Spaniards in 1540 becoming a cabildo (a Chilean government seat) in 1555.

The town square from San Pedro de Atacama is without a doubt one of the main attractions of Chile’s archeological capital. There is nothing better than to watch time go by under its enormous pepper or molle trees which will cool you off in the summer evenings in San Pedro de Atacama.

On one side of the square you will find the San Pedro de Atacama Church; undoubtedly one of the most beautiful churches of the north of Chile. Its construction date is unknown, however, it served as a parish in 1641 and in 1951 it was declared a National Monument.  The walls are made of adobe and the ceilings are made of Chañar tree, locust tree, and clay, which were later covered with cactus wood. This one of the main attraction from San Pedro de Atacama.

Across from the square you will find the Municipality of San Pedro of Atacama, the police station, the post office, the Padre le Paige Museum (parto of the Archeological Tour you can make in San Pedro de Atacama) and the tourist information office (SERNATUR).
Downtown San Pedro de Atacama still preserves the structure and construction of the Spanish colonial influence, antique adobe houses with interior yards, and roofs made of clay and hay.

The main street from San Pedro de Atacama is Caracoles, so named because in earlier days miners left from here to work in the Caracoles silver mine discovered in 1870 by Diaz Gana.

Now a days you can find nice restaurants, tourist agencies and stores in San Pedro de Atacama, which welcome tourists from all over the world.

One of the world’s most fascinating and exotic destinations, San Pedro de Atacama never fails to surprise and delight. Whether you favor high culture or high adventure sanpedrochile.com will guide your way into a fantastic experience. http://www.sanpedrochile.com/en/
Posted by Alyssa Johnson at 10:07 PM 1 comment:

Discover the beauty of San Pedro de Atacama in the most arid desert in the world. It is an unforgettable experience; however, to discover the thousand-year-old mysteries that surround this culture, it is without any doubt, the greatest secret that this land hides. What better way to learn about the Atacama lifestyle in depth, than to take a series of tours that combine the wonders of the desert and the direct contact with its original cultures.

The day’s activities begin with the Communal Trail, an activity that invites you to share the commoners from San Pedro de Atacama daily life concerning their traditional activities such as the production of Pataska grain, Chañar and Carob tree syrup and llama breeding. Later followed by lunch at the country restaurant, near San Pedro de Atacama, “Coyo Trails.” In the evening, the Ancestral Caravan is a must; a llama-led hike on ancestral routes to see the spectacular sunset that dyes the Andean sky red from San Pedro de Atacama.

At night and while you wait for a tasty llama BBQ, you can enjoy an Andean Astronomy session, where the stars from San Pedro de Atacama are contemplated and their relationship with the daily life of the Atacaman people is explained.

Find Best San Pedro Atacama Hotels - All the information you need to find and book your hotels in san Pedro de Atacama. On line booking in  Atacama .
Posted by Alyssa Johnson at 10:25 PM No comments: